This blog details an analysis of the packet capture capabilities of the WLAN Pi and seek to answer the question:- “can it be used to capture four 20MHz channels simultaneously?”. But before we delve into the detail, let’s start with some background and acknowledgments. The WLAN Pi is a WLAN testing tool built upon the NanoPi Neo2 single-board-computer (SBC) and has been developed by Jerry Olla – for more information please visit www.wlanpi.com. With the recommended Comfast CF-912AC Adapter, a user of the WLAN Pi can perform wireless packet capture.

Nigel Bowden developed a bat file called WLANPiShark which configures the WLAN Pi to be used as a TCP dump adapter to stream frames directly in to WireShark (See Nigel’s blog here).

Following Nigel’s blog, Gjermund Raaen wrote a blog article (here) describing how he was able to capture four 20MHz channels by using the WLAN Pi and WLANPiShark configured for one 80MHz wide capture channel. An obvious initial reaction to Gjermund’s blog was to point out that it is not possible to simultaneously capture on four 20MHz channels from one adapter. Gjermund was kind enough to share his capture files and very quickly it could be confirmed that he had in fact captured packets on all four 20MHz channels, within a single 80MHz channel, with very little packet loss.

A lab was therefore set up to try and understand the capabilities of the WLAN Pi packet capture solution and how the NIC’s 80MHz monitor mode was actually working.

How an 802.11 NIC configured for 80MHz channels receives data

When an 802.11 STA is operating on an 80MHz channel, it will listen on its primary 20MHz channel for PHY (physical) layer preambles and headers. 5GHz PHY preamble and headers are always transmitted on a 20MHz channel at 6Mbps using BPSK modulation. Information within the PHY header informs the STA how to receive the pending MAC frame – which includes the channel width, MCS, number of spatial streams and whether or not to use a short guard interval. Following the PHY header, the receiver will switch channel width, modulation, etc in order to receive the MAC frame.

After receiving the MAC frame, an STA will look at the receiver and BSSID MAC address to determine if it needs to pass this frame up the protocol stack.

As many will know, a popular protocol analyser is LiveAction’s Omnipeek. When fitted with the OmniWiFi adapter in monitor mode, Omnipeek receives frames in the same manner that a standard 802.11 STA does … with one exception. Although it listens on the configured primary 20MHz channel for PHY headers to know how to receive an imminent MAC frame, in monitor mode the adapter will pass all MAC frames up the stack to the analyser regardless of the frame’s MAC addresses. Therefore, if we configure our analyser to capture 802.11ac primary CH36, as indicated in Figure 1, our capture would receive all frames transmitted on the configured 80MHz, primary 40MHz and primary 20MHz channels. However, it would not receive frames transmitted on the secondary 20MHz or 40MHz channels because their PHY headers would not be transmitted on CH36.

Why is the WLAN Pi packet capture different?

To investigate how the WLAN Pi was performing an 80MHz packet capture, the lab environment shown in Figure 2 was setup and the WLAN Pi was configured as a TCP dump adapter into Omnipeek The WLAN Pi’s Comfast CF-912AC Adapter was set to CH52 80MHz. 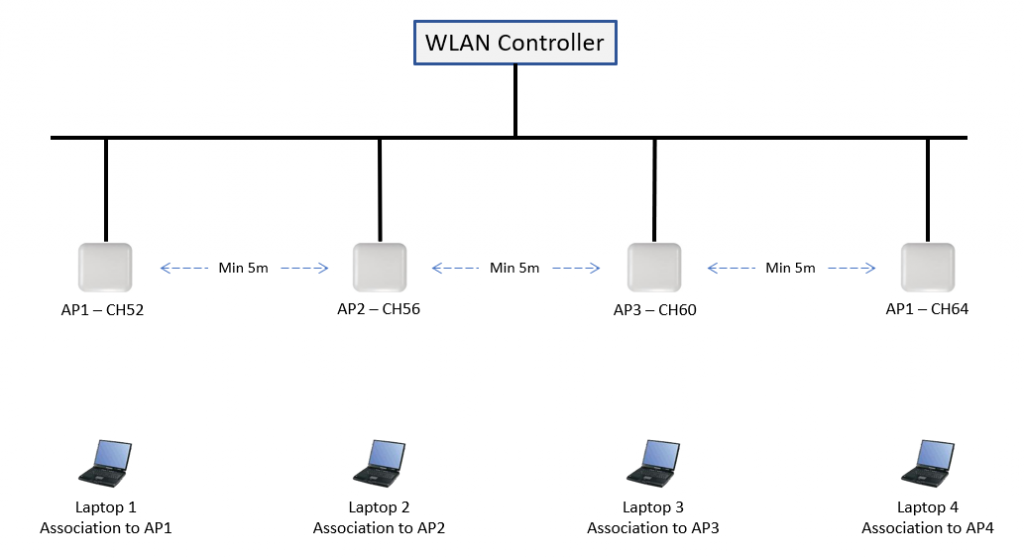 For the first test, a continuous Ping to WLAN controller was sent from each laptop. Initial analysis of the beacon frames captured showed that beacons were being captured from each of the lab APs. In Figure 3 you can see the beacon frames. Notice the capture channel is set to Channel 52 for all frames, but the channel on which the Beacons were transmitted is shown in the “Decode: Primary Channel” column.

If we look at the WLAN statistics, we can see that we have captured frames from all four APs and their associated laptops. 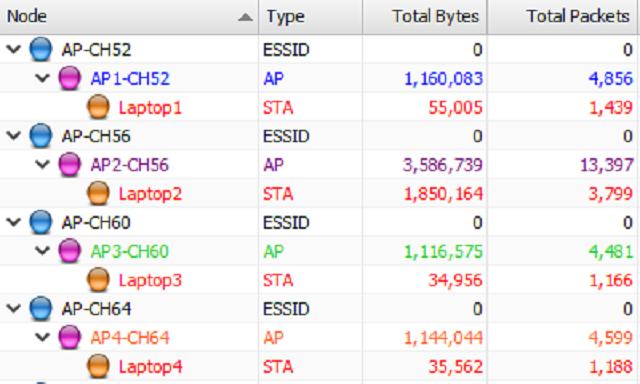 However, taking a closer look at these statistics, we notice that far more packets have been captured on channel 56 than for the other channels. Further investigations revealed that, although we captured most of the packets transmitted by Laptop 2, most of the packets captured from Laptops 1, 3 and 4 were mainly control, management and broadcast data frames with the majority of the unicast data frames absent.

For the second test a large download was initiated on each laptop. This time the capture was configured on channel 64 with an 80MHz channel width. The results were similar to those from the ping test but this time channel 52 was the favoured channel and the difference between the volume of packets captured for each channel was much clearer.

From this test, it was clear that while the WLAN Pi’s adapter was tied up capturing a frame on one 20MHz channel it was not able to simultaneously capture frames on the other 20MHz channels across the same 80MHz channel.

When configuring the WLAN Pi with a Comfast CF-912AC adapter in Monitor mode with an 80MHz channel width, the following conclusions were drawn:

While the WLAN Pi is not going to replace the packet capture tool kit yet, the 80MHz monitor mode of the CF-912 is interesting. Perhaps if there could be more control over its behaviour, there may turn out to be some valid use cases.

This website uses cookies to improve your experience while you navigate through the website. Out of these cookies, the cookies that are categorized as necessary are stored on your browser as they are essential for the working of basic functionalities of the website. We also use third-party cookies that help us analyze and understand how you use this website. These cookies will be stored in your browser only with your consent. You also have the option to opt-out of these cookies. But opting out of some of these cookies may have an effect on your browsing experience.
Necessary Always Enabled
Necessary cookies are absolutely essential for the website to function properly. This category only includes cookies that ensures basic functionalities and security features of the website. These cookies do not store any personal information.
Non-necessary
Any cookies that may not be particularly necessary for the website to function and is used specifically to collect user personal data via analytics, ads, other embedded contents are termed as non-necessary cookies. It is mandatory to procure user consent prior to running these cookies on your website.
SAVE & ACCEPT